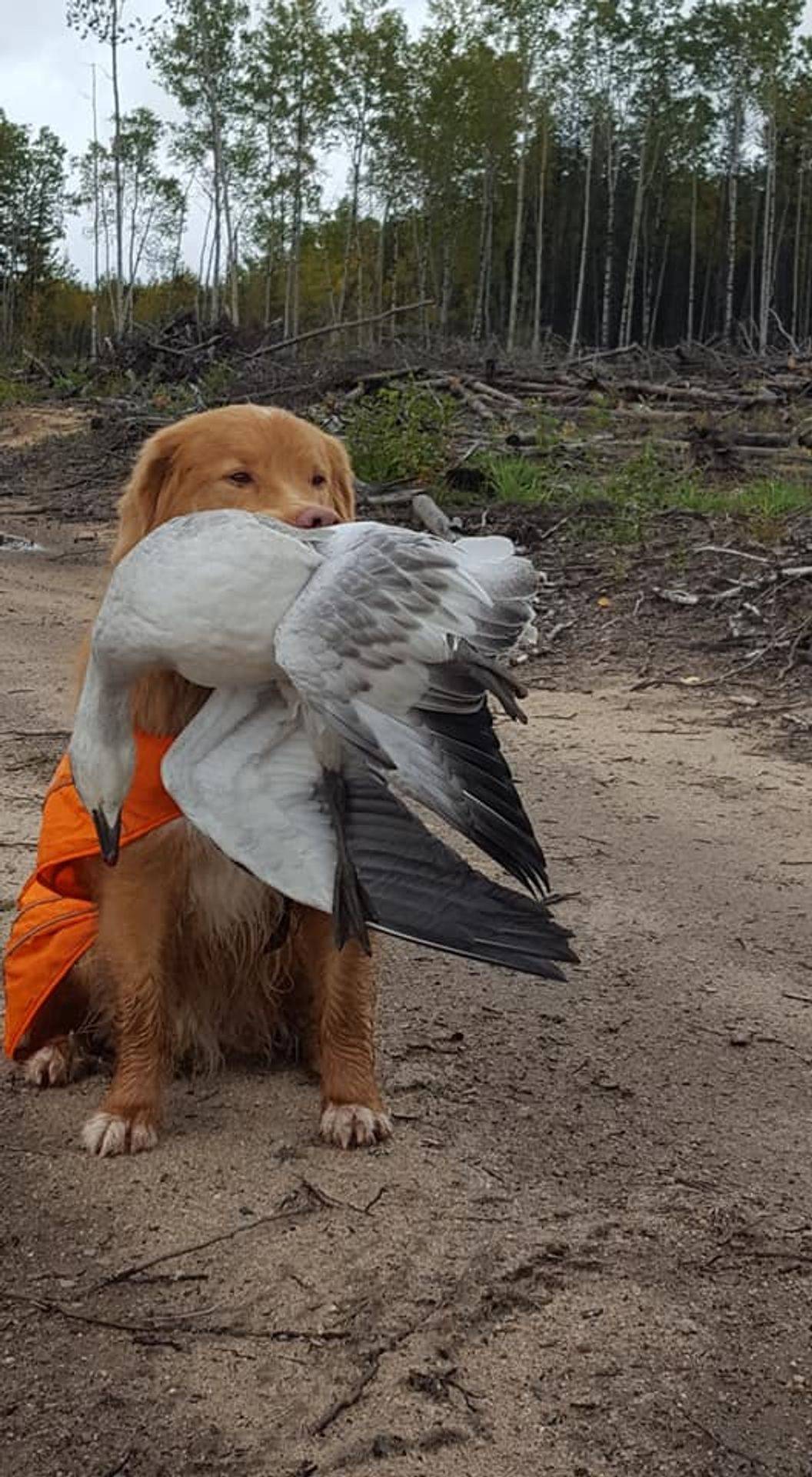 Rogan was a by-your-feet, calm, sweet dog at home but a driven dog in the field.  His eagerness showed through his eyes and his smile.   We were blessed to have Rogan as our first toller and my first dog.  He truly exceeded expectations in everything he accomplished.   Rogan was loved by children at our lake as they would vie for the opportunity to be on the end of his leash and clamour to line up on the dock to take turns throwing bumpers for him.  Rogan always accepted new dogs into the family, whether it was on a long-term or short-term basis and in his old age still enjoyed playing with puppies.  Rogan had an amazing natural tolling behaviour and we witnessed ducks swimming in much closer to shore to watch him ‘work’.  Toss him his favourite rubber stick and tell him to dig?  Well, he would be off entertaining himself, spectators and the ducks hours!

Rogan received his Obedience Trial Championship (OTCh) at five years of age, coming within points of a Master/Excellent Obedience Title.  But when it was time to move on, we left the obedience ring behind as his joy of this ring was left for the field!  That is where he wanted to play.   In the meantime, we entered our first conformation show and Rogan garnered nine points his first three-show weekend amidst a large entry, with Best of Breed wins and easily finished his show championship at his next outing!    Rogan completed his WCX title and JH title.  He was able to compete at the Senior Hunt level a few times at ten years of age (so close but a bit too eager).  He loved every minute and although over ten years of age, he flew as fast as could on land or through the water!

Rogan qualified for the Nova Scotia Duck Tolling Retriever Club of Canada (NSDTRCC) Dobirstein Award for versatility.  He was the recipient of the first Shilo (Veteran’s Field) Award and trophy at the National Specialty in 2011, qualifying for his WCI at over eight years of age.   In the Rally-Obedience ring, he became the second toller in Canada to qualify for the Rally Advanced Excellent Title.   He was #2 and #4 Obedience Toller in Canada in multiple years.

We were truly blessed to have loved this precious soul.

Finn was our second toller and was a wonderful addition to the family and quickly joined the obedience circuit with Rogan.   He attained his obedience titles very quickly, not always with perfection but would consistently do the work in the ring.  His OTCh was obtained when he was three and a half years old and within a year had obtained his OTChX, finishing his career with eight elusive doubles!!  But not so many Master points.

He took a bit of time to warm up to field work as he enjoyed a bit of 'touring a new site first' but when things kicked into gear, three titles in six weeks!  In his retirement was a crazy field dog!!  Finn also obtained his Conformation Championship in fairly short order, coming in second to Rogan many times but once Rogan was out of the way, it only took a few more outings.  Finn is an NSDTRCC Dobirstein Recipient and was runner-up to his brother for the Shilo Award (veteran field) at the National Specialty in 2011.

Finn loved to sit by the window and watch.   He was our Alert Dog!   Not much got by Finn.   He was a quiet boy and eager to please.

Sully travelled over the Rainbow Bridge in May of 2019, with little time for goodbye, which broke our hearts.

Sully was a very happy-go-lucky dog, sure to let you know when he should be out doing something!  He had early success in obedience and rally-obedience, finishing his Obedience Trial Championship when he was just over three years of age and my first High In Trial Toller (HIT).  Sully titled in CARO Rally with a Magna Cum Laude with a perfect score.   He received titles in the field - WCX in 2014 and my first toller to receive a Senior Hunt Title in 2015.  Qualified at the Master Hunt Level in 2018, so we were very sad our jouney was interrupted.   We were also just starting to trialtowards his Master Rally when he suddenly took ill.

We started Sully in conformation classes to help recovery from a groin injury, helping him to relearn to balance his weight onto all four legs.   We decided to enter Altered Classes in the conformation ring.   At the National Specialty in Vancouver 2015, Sully took the large rosette for Best in Field Class and the Best Altered in Specialty Show and was recipient of the Rosewood Challenge Cup!   He was the first toller in Canada to receive a CKC Altered Championship, which he finished with three consecutive Best Altered In Show (BAIS), sweeping the Altered Show Ring for the weekend!   He was recognized by our National Breed club with the Dobirstien Versatility Award.  He also sniffed out a few rats and received a Barn Hunt Novice title in early 2018.

Sully was loved by many and a missed addition to our family!  He truly believed the world was his family.  Sully loved grouse hunting and duck hunting!

**  updated -  the fall of 2019 is extremely hard on us as grouse season is here and my heart misses spending time on the back roads in lake country looking for grouse and enjoying our time together.